There have been some reports floating around today of Gmail not displaying images for some messages.

In my testing I’ve been able to reproduce it with some messages in the Promotions tab, but only in the “classic” Gmail web interface. However, these same messages display images when viewed in Inbox.

This seems intentional, although no official announcement has been made. Maybe Google is launching a push to encourage migrating to Inbox? We’ll await word from the Gmail team, but in the meantime more testing is in store to pin down exactly what in the message is triggering the change.

4/5/18 UPDATE: It seems this change was not permanent, with all messages appearing to display images (even those previously not displaying them). Google has been silent about this, so we’re still unsure if this was some sort of test, an error, or something else entirely. 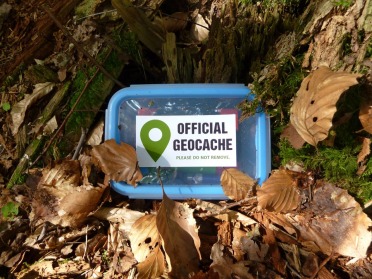 In late 2013, Google began to cache all images in email sent to Gmail users, storing remotely-hosted images on their own servers instead of accessing them each time an email is opened. Laura at Word to the Wise wrote up some good info at the time, focusing mainly on the parts of email tracking that were (or were not) affected by the changes.

Fast forward to 2018, and it looks like Yahoo has adopted a similar policy of image caching. According to Litmus, Yahoo recently began caching images on their servers in the same manner as Google. And like Google’s version, this one won’t break open tracking –  but could cause some unusual data points or issues with geolocation or user agent tracking. If you track the location of email opens, you’re likely to start seeing a lot more traffic from Sunnyvale, CA (the location of Yahoo’s servers), and any dynamically-generated content based on the location of the recipient will reflect that. In fairness, IP geolocation has never been a precise science, so most marketers should rely on other signals along with that data to serve up location-specific content.

When Google introduced this feature, they used it as a platform to allow images to load by default for all mail sent to the Inbox. Is it possible Yahoo is planning a similar feature? Yes, according to the answers provided by the Yahoo Engineering blog.

This morning, they officially announced the change, also confirming images will now be on by default for Yahoo and AOL in desktop and mobile versions. We can likely presume this applies only to messages in the inbox, though no specifics are provided. The post also indicates that Yahoo will “continue to support most” open tracking via pixel, though again details are sparse.

And for those using IP geolocation to serve dynamic content, the authors “recommend falling back on other tools and technologies which do not rely on IP-based targeting.” I won’t say I told you so.

Last month Al Iverson at Spam Resource, along with Engadget and XDA developers, reported on a new feature of Google’s Inbox that prompts recipients to unsubscribe from mailings they don’t open. The card, which appears at the top of the interface, calls out mailings categorized as Promotions that the user hasn’t opened in the past 30 days and provides the option to unsubscribe or not, all with a single click. 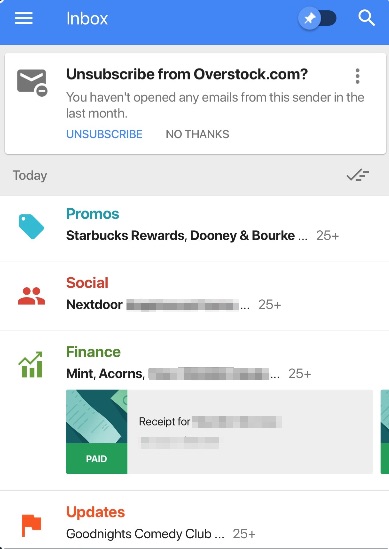 Introduced in 2014, Inbox is Google’s next-gen email client. The app takes Gmail’s concept of the Tabbed Inbox to the next level, bundling messages by type and showing cards based on data found in emails – receipts for purchases, travel arrangements, and event tickets, for example. At the time of Al’s post the feature was live on the web and Android versions of Inbox, but I can confirm it has now arrived in the iOS version as well.

According to Litmus, Gmail accounts for roughly 26% of all email opens – second only to Apple’s iOS mail client. This doesn’t indicate what percentage of those openers use Inbox as opposed to traditional Gmail, but Google has previously indicated that Inbox has a significant number of users and in 2016 noted that 10% of all email replies on mobile came from the Smart Reply feature found within Inbox.

Google continues to innovate in finding ways to prioritize mail its users want and get rid of mail they don’t. Does your email strategy reflect that? If your sending patterns and list management foster engagement and interaction, you’re likely to see less of an impact from a change like this. Alternatively, if you’re still holding on to the “batch and blast” mindset, you may not be so lucky.

If you’ve checked Google Postmaster Tools lately, don’t freak out just yet about your IP reputation. As first reported by Word to the Wise,  the IP reputation metrics appear to be broken at the moment, displaying a “Bad” reputation for all IP addresses since 9/9. I’ve seen this in my own Postmaster Tools account, along with a lack of data for domain reputation since 9/8. Authentication and Encryption metrics appear to be working correctly for me, but I can’t say for sure whether the Spam Rate, Feedback Loop, or Delivery Errors charts are correct – they all show zero since 9/8, but that’s not uncommon in my experience.

Like Laura, I’ve not seen any delivery problems associated with the change in metrics, with bounce and open rates at Gmail pretty consistent based on a few spot checks.

As of yet there doesn’t appear to be an official confirmation from Gmail, but clearly something is hosed with their data. Is it possible this is tied to the Postmaster Tools updates that were promised a few months back? I’d say it’s unlikely…but a guy can hope, right?

Today on the Google Security blog, the email giant took a moment to laud the success of their “lock icon” indicating that a sender or recipient of an email doesn’t support TLS encryption. The post indicates Google has seen a 25% increase in the amount of inbound mail authenticated with TLS in just 44 days since the change was implemented.

In light of this success, Google has teamed up with Comcast, Microsoft, Yahoo, and others to draft an IETF spec for “SMTP Strict Transport Security.” This protocol, if implemented, would dictate that all mail is sent using authentication and require any auth failures to be reported to allow for further investigation.

In addition, Google also announced that their potential malicious link warnings, which are currently displayed at the top of the message, will now generate a full-page browser interrupt when one of these links is clicked:

This behavior will also carry over to the very rare “state-sponsored attack” warnings that are displayed for journalists and activists who may be potential targets for government censorship (or worse).

Many in the email industry have a love/hate relationship with Gmail: they love that their opt-in mail usually gets delivered to the inbox without any trouble, but they hate that there seems to be no help from the Gmail team for those times mail doesn’t make it to the inbox. However, an announcement on the Gmail blog today could prompt a change of heart from many senders.

Starting today, Gmail is rolling out a new feature called Gmail Postmaster Tools, which it says will allow senders to “analyze their email, including data on delivery errors, spam reports, and reputation.”  These tools, which are presumably the evolution of Google’s pilot FBL program of 2014, are designed to help senders “do better” at getting mail delivered to the Gmail inbox.

The Gmail team also announced that their spam filtering technologies are becoming even more advanced, including the use of an “artificial neural network” to identify spam that might seem like normal, wanted mail at a glance. In addition, they have made improvements in honoring individual preferences (I like newsletters but my friend doesn’t), as well as sniffing out well-spoofed phishing emails.

Keep your eyes on the WhatCounts blog for an upcoming post with more details on the Postmaster Tools and how they can help get your mail delivered where it belongs.

Not to be outdone, Google announced that guaranteed invites to Inbox, which sorts mail into categorized “bundles” like Promos, Travel, and Finance, would be available to anyone who asked between 12pm Thursday and 12pm Friday ET.

The new Outlook app certainly takes some cues from Gmail’s bundles, but creates only two categories of email: Focused and Other. Focused consists of the emails that Outlook believes are important to you, much like Gmail’s Priority Inbox (a precursor to the Inbox app). Users can determine future behavior by moving mail from Focused to Other, or vice versa, as needed.

Even though Google has been tossing out Inbox apps left and right, it’s still a beta product that has somewhat limited release – for now. With the release of the Outlook app for mobile, it’s likely that Google will speed up the rollout of Inbox to compete, which could have implications for senders in the form of decreased open rates for mail that is routed into one of the  predetermined bundles provided by Google and Microsoft. However, it’s also possible that, like Gmail’s Tabbed Inbox, users on mobile may find the categories actually help them read more of their email, by placing it into handy folders they can check at specified times.

It’s too early to say what impact this new breed of email apps will have on senders, but it’s certainly safe to say the mobile email space is changing rapidly. As compartmentalization of the inbox increases, timely, relevant emails will continue to represent senders’ best chance to cut through the increasingly noisy email space.